The Preserve at Boulder Hills Continues to Grow 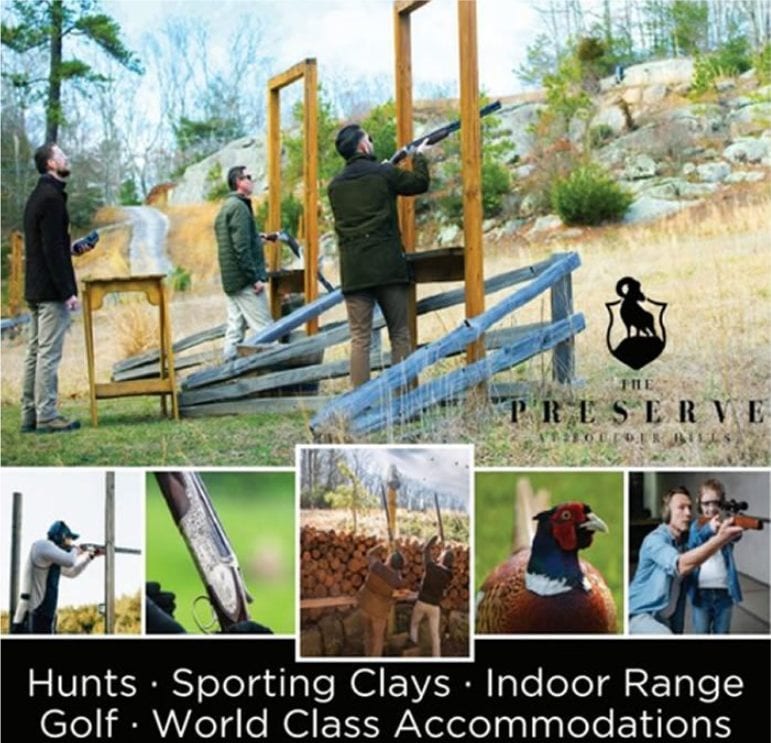 This is the first time that we have ever had guns in a picture (back cover) in our publication. “What are golfers supposed to do in the off-season?” asked Paul Mihailides, the driving force behind The Preserve at Boulder Hills in Wyoming, RI that continues to grow at an amazing pace.

“You’d be surprised at the number of golfers that really enjoy continental hunts,” he added. Mihailides has built the largest underground range in the country. The range has four rifle lanes at 150-yards in length. There are also 16 rifle and pistol lanes at 33 yards and designated indoor lanes for 3-D archery. A private member lounge with member locker rooms and a separate entrance is also part of the range.

In addition there is a 100 shot, 16-station sporting clay course and also a compact sporting clays course with 10 stations with a warming hut. The Warming Hut is great for gatherings and sport shooting, but it’s ideal for corporate meetings as well.

It was only July 2014 when Mihailides broke ground for a new 18-hole par 3 golf course on the former site of the Boulder Hills Golf Course. “We have great plans for this property. We are going to build an outdoor facility unlike anything else in New England and much of the United States,” he told my wife and I.

Mihailides, a native Rhode Islander who had developed golf and country clubs for decades, had a life-long vision of building a property just like The Preserve at Boulder Hills that provides great golf and wonderful outdoor and sporting activities for a select group of members who want to experience this type of lifestyle.

We toured the ponds on the property that he was going to stock with rainbow, brook and brown trout for fly-fishing. We were shown the sites where two zip lines were going to be placed. He showed us the ATV paths, the land for tennis courts, and a beautiful location for homes that he was going to build for the families who would become members of this unique parcel of land. We had lunch is the beautiful clubhouse with a 19th hole just outside the window.

Fast-forward just over three years. The golf course is one of the top Par 3 courses in the country. It has hosted a few tournaments and has received rave reviews by all who have played it. P.H. Horgan of Newport, who has played on the PGA Tour and is currently playing on the Champions Tour, played the course and toured the property recently.

“It is an amazing property. It truly is a preserve and really a sanctuary. It definitely belongs on the Golf Advisor Top 10 Par 3 Courses in America. I never knew this property existed. It definitely is one of the best-kept secrets in Rhode Island and Paul should be so proud of what he has designed. He is a true visionary,” commented Horgan who went on to say that he would be proud to be a Golf Ambassador at the club and show people around the magnificent property.

During the last golf event in June, two of the players who had played the Par 3 course at Augusta National said that the Preserve was a better course. The Robert McNeil-designed course is carved into the land that earned its name as “Boulder” Hills, and the greens are fast and true. Elevation changes make hitting shots more difficult.

As Mihailides looks back at these three years he says, “This property and what it has become far exceeds any of my expectations. Our goal of providing a second-home life alternative has been so well received. We have had many former Rhode Islanders who have moved to Florida or other locales who want to come back for a couple of months each year.

Our homes, condominiums and other lodging will provide members a chance to live a lifestyle that is unique with our outdoor activities and wonderful amenities.”

Membership is limited and is currently at $250,000. There are over 50 members already and membership goes up $25,000 each time there are five new members.

“We have grown from just over 400 acres to over 1,000 and we abut the federal Carolina Nooseneck Management area that has over 2,500 acres of land,” said Mihailides. We are less than a half hour from T.F. Green Airport, and 20 minutes from Westerly Airport for those with their own aircraft. We are a half-hour from Providence, and hour and one-half from Boston and 2 ½ hours from New York City,” he added.

The Preserve is truly a four-season sporting retreat. Besides the great golf there is ATVing, bird hunting, camping, cross country skiing, fly fishing, hiking, horseshoes, ice skating, mountain biking, rock climbing, sledding, snow shoeing, swimming, tennis, volleyball and zip lining for the outdoors folks. For those who like to stay in more often there are cooking classes, wine tasting and other fun activities.

As a life-long golfer and sportsman, The Preserve at Boulder Hills is Paul Mihailides’ legacy to his family, friends, and community. It is a place where like-minded people gather in celebration of the land and the wonderful things that they can do on it.